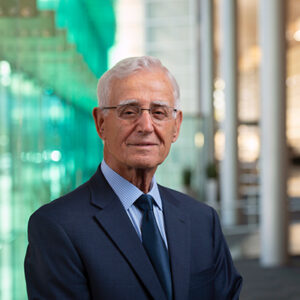 Born in 1931 in Armenian village Kheder Beg (now Turkey), Zohrab Tazian and his family were forced from their homeland and relocated to a refugee camp in Lebanon during World War II where he attended grade school. In 1945 he went to St. James Seminary in Jerusalem for three years then dropped out because of the danger of the Palestinian war.  After the war, he went back to Lebanon instead of the refugee camp joining his mother and three brothers in Beirut. His youth group director found a scholarship for him at the Sorbonne in Paris. Zohrab had to stay with his family to help support it financially and turned down the scholarship. In 1951, Zohrab and his brother started a family business and in six years increased the family income 15-fold. This business made it possible for him to finish high school and come to the United States. In the fall 1957, Zohrab came to the United States to pursue an engineering degree at Indiana Tech. Not long after his graduation in 1960, he started a Z.K. Tazian Associates, a successful civil engineering and land surveying business working on land developing projects for clients and his family. As a hobby rather than part of the business, Zohrab was asked to design the All Saints Armenian Church in Glenview Illinois, St Gregory Armenian Apostolic Church in Granite City, Illinois, and St. Nicholas Orthodox Church in Fort Wayne, Indiana.

Due to his unwavering affinity for and immovable dedication to his alma mater, Tazian was elected president of the Indiana Tech Alumni Board and was the alumni representative for the university’s board of trustees. Then in 1970, Zohrab was tapped to become a full member of the board of trustees and has served for more than 27 years, during many of which he was the youngest member on the board.

Zohrab’s long-time relationship with Indiana Tech stems from a friendship and partnership with a familiar name on campus in Ed Schaefer. Ed was on the board of trustees and held Zohrab’s admiration for his academic and professional accomplishments. “His deliberations stood out. He approached education and his service to the college with a passion. I looked up to him as a father figure,” he says in light of his own father’s passing when Zohrab was 13 years old.

“Watching him gave me added incentive to work harder on the board and to approach nonprofit work with passion. He wasn’t there for the honor and glory or recognition of himself, he was there to make things happen.” Zohrab said of Ed.

Zohrab saw the school through some of its most difficult financial times when the board was looking at closing the school. Deeply moved by the words of Ed Schaefer, Zohrab and the rest of the finance committee raised over $400,000 immediately to pull the school out of danger. During that time as well, the faculty was considering a strike. Zohrab was asked by Dr. Williams (the faculty representative to the board) to speak to the faculty and the whole student body in the chapel asking them all to stay the course, which they did.

That was not the end of the challenges the university faced which required Zohrab’s attention during Paul Seitz term as president of the board of trustees. Thomas Scully was the president of International Business College and a neighbor of Zohrab’s. Zohrab told Mr. Scully how bad the financial situation was at the school, and yet Mr. Scully accepted the appointment as President of the University from the board of trustees.  Several months later, future university president Don Andorfer was brought on board to manage finances which brought relief and confidence to the administration. During that time, President Scully added night school for non-traditional students in reaction to the cessation of the GI Bill and the subsequent movement of students to Purdue University.

With that, there was new attention being given to humanitarian disciplines in business and entrepreneurial studies but Zohrab and other members of the board were not happy about the focus being taken away from engineering. A strong push advocating for engineering, a heartfelt plea of understanding, and an outstanding gift of $2 million later by Ed Schaefer brought stability to the university.

He continued to advocate for Indiana Tech through his role on the board of trustees and his dedication to the mission of Indiana Tech through the establishment of the Nicki & Zohrab Tazian Scholarship to assist students in the College of Engineering and School of Computer Sciences. Zohrab’s philosophy in his support of the school lies in the words that his friend and mentor Ed Schaefer echoed years earlier, “I understand my position on the board to keep an eye on the administration and make sure things are going well.”